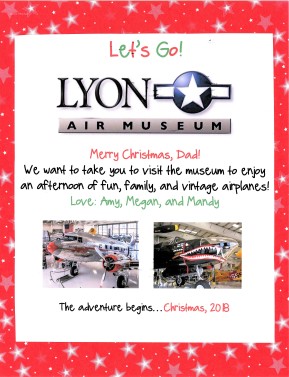 While visiting our daughter and two granddaughters at Christmas, I received a very nice Christmas present from them: an afternoon at the Lyon Air Museum, in Southern California! The Lyon Air Museum is located at Irvine’s John Wayne Airport and contains many vintage World War II airplanes, all beautifully restored, most in flying condition. In addition to the airplanes, many other vintage conveyances from the era are displayed, including one of Adolph Hitler’s personal staff cars, presumably used by him to ride into Paris after conquering the French in 1939.

One of the museum’s prized flying airplanes is the B-17 heavy bomber, Fuddy Duddy. The tradition of painted “nose art” on World War II aircraft was prevalent particularly on heavy bombers such as the B-17 “Flying Fortress” and the B-24 “Liberator.” These four-engine, long-range bombers were as instrumental to the defeat of Germany as any weapons in the U.S. arsenal. The B-17 earned its renown by destroying much of Germany’s military and civilian infrastructure, flying out of large air fields located in the English countryside.

I relished the afternoon we spent in the museum with our girls, not only because I have long appreciated the history of World War II aviation, but also because I had a rare chance to give my grand-daughters an up-close-and-personal awareness of another time, the “greatest generation,” and aviation’s important role in defining the path of world history. There is no substitute for experiencing, up-close, the mystique of these great airplanes in order to appreciate their role in that history.

Peering up into the underbelly of Fuddy Duddy through the crew entry hatch is bound to stimulate any teen-ager’s appreciation of the courage it took for crew-members to clamber up inside such a large, complex airplane for dangerous mission after mission over enemy territory. So many crews and men never made it to the magic mark of twenty-five completed missions which would give them a one-way ticket back home, perhaps to become a flying instructor training pilot-recruits. Many thousands of B-17 and B-24 crew members went down in the gunsights of swift and deadly German fighter planes whose mission was to intercept and destroy the “heavies.” And there were the thousands of huge, long barreled German flak guns on the ground, poised and ready to fill the high skies with exploding shell fragments, any one of which could rip apart men and machines alike.

It was gratifying to observe the curiosity and interest which quickly developed as we began our tour of the museum! Soon after we started at the B-17, we spent a half-hour in the museum’s mini-movie theatre to watch a film documentary on the air war over Europe which included much aerial footage and commentary from Andy Rooney. Rooney was the long-time, now deceased, CBS commentator on 60 Minutes. During the war, he served as a war correspondent experiencing, first hand, the B-17 during actual missions. I was pleased to note that the film was one included in my personal DVD collection of worthy war documentaries; one cannot help but be impressed by the viewing experience! 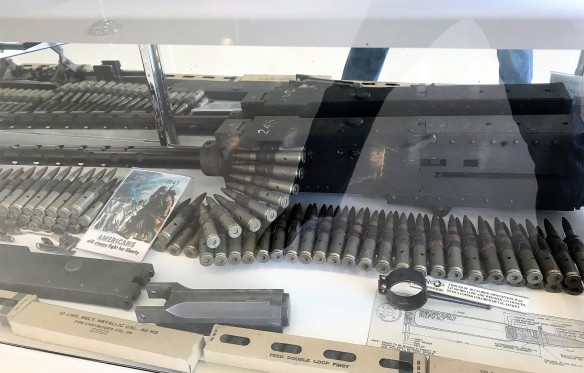 A museum docent approached us as we examined the B-17 and produced two dummy bullets to illustrate the fire-power of the thirteen .50 caliber machine guns positioned at six locations around the airplane. Alongside the .50 caliber sample, the .22 bullet looks downright puny, and, yet, these airplanes were still very vulnerable to German fighter interceptors until late 1943 when the fabled P-51 Mustang fighter was introduced which could escort the bombers deep into German territory and back. The .50 caliber machine guns on the B-17 fired thirteen rounds per second, all fed from long cartridge belts. After a protracted aerial battle with German interceptors, the waist gunners stationed inside the fuselage at both sides of the airplane were typically ankle-deep in empty brass shells ejected from hot, rapidly firing guns! 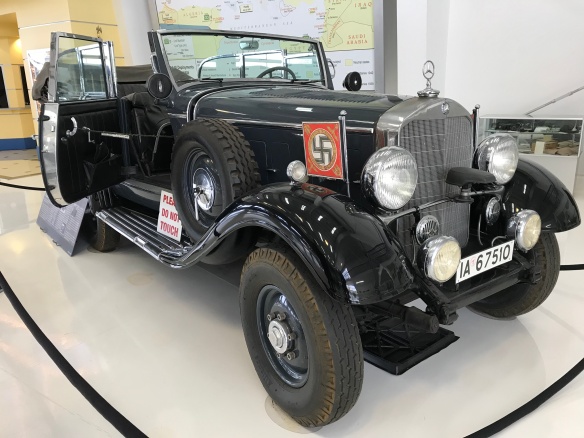 One of Hitler’s several Mercedes Benz personal staff cars –likely the one in which he entered Paris after the Nazi victory in France.

A sign on the wall provided a summary of the debt owed to the men of the Mighty Eighth Air Force which operated B-17’s out of England. Among its stats:

“Hitler started boasting that he converted Europe into an impregnable fortress. But he neglected to provide that fortress with a roof.” Franklin D. Roosevelt, message to Congress, September 17, 1943.

Of course, these numbers pertain only to the Eighth Air Force, not including the other arms of the Army Air Force and their theatres of operation. 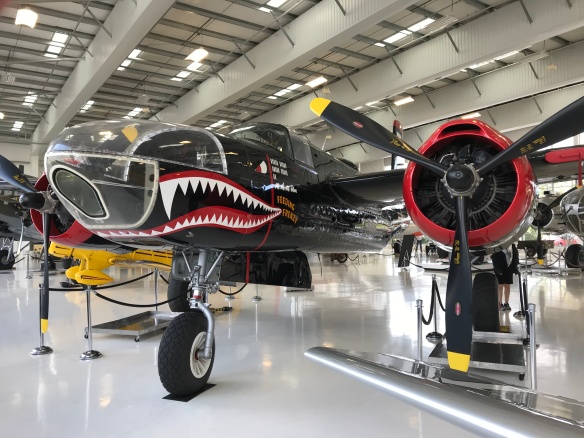 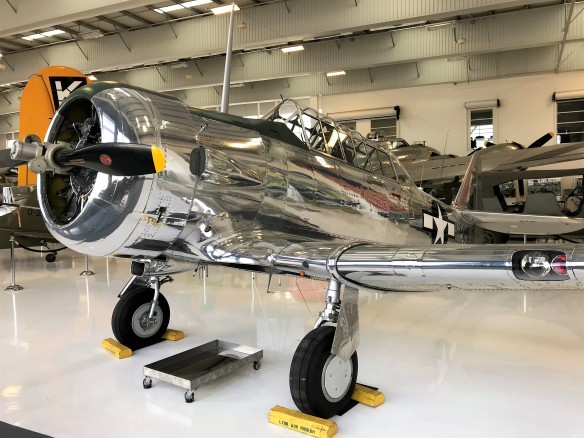 Douglas DC-3: The backbone of the airline industry

All in all, we had a very fine afternoon at Irvine’s Lyon Air Museum. I heartily recommend it for adults and youngsters, alike! Our thanks to the spirit and generosity of Gen. William Lyon for preserving this important collection and for making it available to the general public. 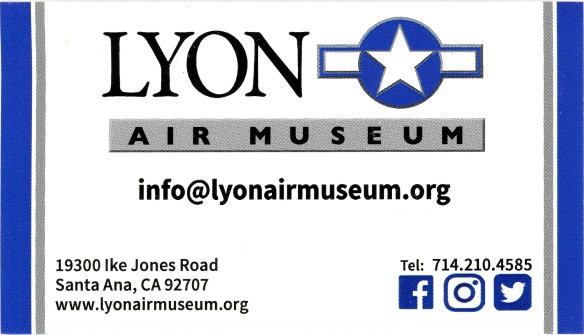 Time to say goodbye: our Southwest Airlines 737 pulls into the gate at John Wayne Airport for the trip home.