If you simultaneously release a feather and a penny, side-by-side, which will hit the ground first?  If you say, “The penny, of course,” the science of physics has news for you. That is not always true! Inherently, they reach the ground at the same time. Read on to understand why!

By the year 1604, Galileo Galilei had deciphered a long-standing mystery of physics: “The law of fall.” Until that time, “natural philosophers,” as scientists were called, had puzzled for centuries over the question: “Precisely how do physical bodies of mass like a feather and a penny fall to earth under the influence of gravity.” It was clear that objects seemed to fall faster the longer they fell – but according to what mathematical principles?

Do heavier objects fall faster than light ones? It would intuitively seem so! Is the instantaneous velocity of a falling object proportional to the distance traversed during fall – or perhaps to the time duration of fall?

By way of clever experimentation and logical deductions, Galileo deduced the law of falling bodies under the influence of gravity:

Every body subject to fall inherently accelerates at a
fixed rate as it falls, irrespective of its weight (mass).

With a fixed, equal rate of acceleration as decreed by the law of fall, motion physics tells us that two bodies released from rest will fall side-by-side all the way down. The law also dictates that objects in free-fall reach instantaneous velocities which are proportional to the time duration of fall from a rest condition. For objects here on earth, a falling object adds slightly less than 32.2 feet per second to its velocity for each additional second of fall.

The wording of “the law of fall” contains two important implications. First, the key word, “inherently,” implies that the falling body is subject only to a constant force of gravitational attraction. Second, the term “fixed” rate tells us that the acceleration is a fixed numerical value for all bodies of mass… in a given gravitational field. The earth’s gravity is essentially constant over all regions of the globe…at its surface. The moon’s gravitational field is also essentially constant at its surface, but its numerical value is just under one-third that of the earth. A specific body of mass will fall faster here, on earth, than it would on the moon.

Everyday observation tells us that a penny always falls faster than a feather. How, then, do we reconcile our observations with the law of fall and the statement in the opening paragraph of this post? The key to the seeming impasse regarding the falling feather and the penny resides in the word, inherently, as used in the statement of the law of fall which assumes only gravity acting on the object. When objects fall, here on earth, there is an additional force acting on them besides the force of gravity as they fall, and that is the retarding force of air resistance!

If our feather and penny experiment is conducted in a tall glass cylinder with all of its air removed, the feather and the penny will fall precisely side-by-side. I witnessed this at the Boston tech museum many years ago.

The weight of the feather is much less than that of the penny, and the increasing force of air resistance generated during the fall becomes a much larger percentage of a feather’s weight (gravitational attraction) than in the case of a penny. This fact negates the equal acceleration during fall imposed by the law of fall. Physics has a name for the condition which is the basis for the law of fall: It is called the equivalence of  the “gravitational mass” and the “inertial mass” of a body (do not worry if this last comment is confusing to you; a further look into motion physics would quickly make its meaning clear).

Galileo was the first “modern” physicist. His ability to recognize and isolate the “secondary effect” of air resistance in the matter of falling bodies enabled him to bypass the confusion that our everyday experiences often injected into the early study of pure physics. Isaac Newton carried Galileo’s insights much further in his own, subsequent work on motion physics. Newton’s three laws of motion, which every beginning physics student studies, along with his theory of universal gravitation explain precisely the behavior of falling bodies that we have just examined.

One parting comment: Albert Einstein made careful note of the law of fall and the fact that the gravitational mass of an object is precisely equivalent to its inertial mass. Again, it is that latter relationship which dictates that all masses inherently fall with a fixed and equal value of accelerated motion in a given gravitational field. Unlike many fine scientists of the time, Einstein reasoned that the equivalence of gravitational and inertial mass was no coincidence of nature – that something very profound for physics was implied. His persistent curiosity in the matter led him to his theories of relativity which, in 1905 and again in1916, revolutionized all of physics as well as our concept of physical reality.

As for Galileo, his formal statement of the law of fall did not occur until the year 1638, four years before his death. Even though he had reached his major conclusions by 1604, it took him that long to firmly claim priority of his findings by publishing his classic book of science, Discourses on Two New Sciences. 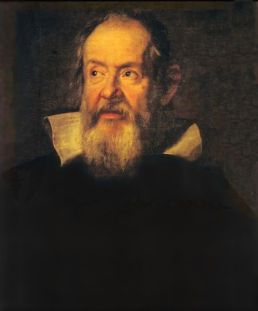 The Master and his most important scientific book

For much more information on this and other aspects of motion physics, see my book, The Elusive Notion of Motion: The Genius of Kepler, Galileo, Newton, and Einstein. See also, several other posts on Galileo, Newton, and Einstein by clicking on the “Home” page in the blog header and searching the archives using a keyword such as “science” or by going to the “science” categories in the archives.

My book and how to order it can be found by clicking on the link below: