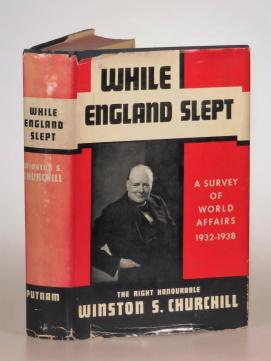 Last weekend, Linda and I went to a book fair in South San Francisco: I had a very interesting experience as a result. We had a choice between attending this smaller, “book and paper” fair or the annual International Antiquarian Bookfair across the bay in Oakland, one of the largest of its kind in the world. We have been to many of those over the years, and they provide a dazzling experience for any bibliophile. But we opted for the simpler afternoon excursion closer to home where book prices are not so astronomical. Linda bought a few inexpensive items, but I came home with an empty shopping bag. There was one book which did capture my attention – a very nice but pricey copy of the 1940 publication by a recent Harvard graduate, one John F. Kennedy. Its title: Why England Slept. That title rang a bell in my mind: I believed it to be an important book explaining how England was so unprepared to deal with Adolph Hitler’s subjugation of Europe in the late nineteen-thirties. Because I have a very strong interest in the subject matter, the book was tempting but for the price and a considerable degree of uncertainty on my part. I decided to pass and do some research on both the subject and the book. 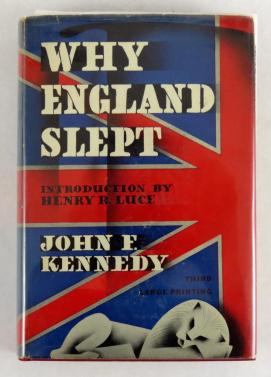 Caution can be a very rewarding virtue, and so it was in this case. Back home, I quickly discovered that young Kennedy’s book sprung from his senior year college thesis and was ostensibly a coat-tail project which followed Winston Churchill’s 1938 publication titled, While England Slept. This latter book contains a collection of Churchill’s opinions and speeches in the period from 1932 to 1938 whose intent was to warn a “sleeping” England and Europe of the dangers posed by Hitler’s rapidly spreading dark shadow. Young Kennedy’s book focuses on the reasons why England was so unprepared prior to Dunkirk and the ensuing Battle of Britain. At least one reviewer panned the book as the relatively immature effort which might be expected of a recent college graduate, no matter how bright! Whatever merits Kennedy’s effort might possess, it also seems clear that old Joe Kennedy had a hand in his son’s publication and its success in the marketplace by calling-in a few personal favors within the publishing world.

It was immediately clear to me that Churchill’s book was THE book to have and read, and it was this title of which I was vaguely aware. Of course, only Winston Churchill could be the author of such an important book, a book that gives throat to a lone voice warning of impending disaster for Britain, indeed for all of western civilization. I am relatively new to the detailed panorama that was the thirties, with its dark Nazi storm clouds forming, and the forties when lightning struck the world at large. But I do know this much: Winston Churchill was likely the greatest figure of the twentieth century. This uniquely colorful character of a man seemed, by some pre-ordained, divine destiny, to be uniquely qualified to do what he did – which was no less than saving the world from Nazi tyranny. Indeed, Churchill himself deeply believed that such a destiny was his protection from risk and harm when he often emerged from underground air-raid shelters to quickly survey the damage from Hitler’s latest blitz attack on London. These images of him amid the smoking rubble and his desire to be among his people were not lost on Londoners.

England survived two major crises subsequent to the infamous appeasements of an invading Hitler by then Prime Minister Neville Chamberlain in the vain hope that an independent England and a Nazi dominated Europe could peacefully coexist – never a possibility in Churchill’s mind. The first crisis was the potential immediate loss of most of Britain’s 250,000-plus army at Dunkirk after Nazi tank divisions and the Luftwaffe had forced the weary remnant of British troops to the sea near that small French village. Only a miraculous small-boat “armada of the people” saved the army by ferrying it across the English Channel to Dover, literally overnight, while the Nazi’s bided their time, assured of victory, so they thought.

The second historic event that saved the nation, known as the Battle of Britain, was fought in the skies above the English countryside. From July to October of 1940, a planned German invasion across the English Channel from occupied France was stymied by the intrepid young fighter pilots of the Royal Air Force. These youngsters, most barely 20 years of age, were badly outmanned in number and equipment, yet they answered the call to scramble their Hurricanes and Spitfires three, four, and sometimes five times a day, intercepting German bombers and fighter escorts of the Luftwaffe whose directive was to destroy RAF airfields and aircraft in preparation for Hitler’s imminent invasion of the island nation. The invasion never happened. The Luftwaffe’s losses signaled the beginning of its end.

After three months of deadly combat in the skies and destruction rained down on British soil, Hermann Goering’s superbly equipped Luftwaffe was beaten back by the courage and skill of the young pilots of the Royal Air Force. Today, there are barely any of them left, those young Brits who flew Hurricanes and Spitfires against the Luftwaffe. Thankfully, there exist a number of excellent interviews and film documentaries which feature the dozen or so survivors still alive several years ago. Go find them and watch them and find out for yourself why Churchill eulogized them forever with his famous words, “Never in the field of human conflict was so much owed by so many to so few.”

“Alone.” That word for many months symbolized the state of both Winston Churchill and the British island nation after Hitler crashed his way across Europe, finally occupying neighboring France on June 17, 1940. Weeks earlier, on May 10, Winston Churchill replaced Neville Chamberlin as Prime Minister. England finally had heeded Churchill’s urgent warnings about Hitler and the need to rearm, but almost too late. Churchill had thought it might be too late, once France had fallen.

So, it is this 1938 book of Churchill’s, While England Slept, which I purchased from a bookseller last week, that embodies those urgent warnings of Churchill to pay heed to the Nazi threat while putting aside the memory of Britain’s revulsion to the all too recent World War I experience. Late last year, the fine movie, Darkest Hour, had implanted in my head the full measure of Churchill’s greatness. His written and spoken eloquence remind me of another great leader/statesman with similar attributes, Abraham Lincoln. It is said of Lincoln, that he saved the union. It can truly be said of Churchill that he saved Europe and western civilization. Lincoln also found himself very “alone” during his first months in the White House as the Civil War raged around him. Although from opposite ends of the personality spectrum, similarities between the two men and their history abound – including well-honed personal senses of irony and humor. 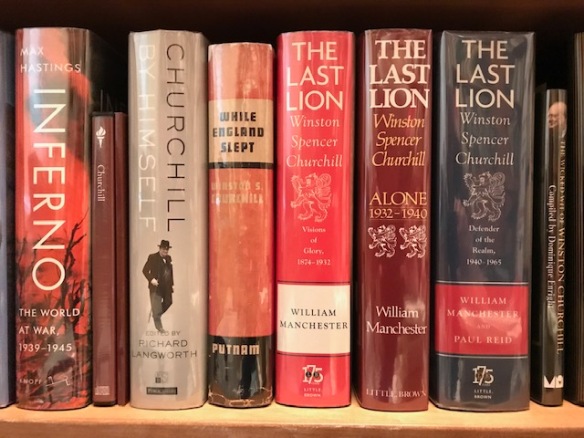 I had already been into Churchill and World War II history for some years before serendipity brought me to this latest book acquisition last week. I now have all the material resources required to truly learn the subjects in greater depth. Along with the problem of available bookshelf space, only available time can slow me down!