Yes, we have identical twin sisters in my family, and I was finally able to meet “the other one” after many years had passed. The “sisters” were born in the mid nineteen-seventies, but their linneage extends back to the late-thirties. I met the “other twin” earlier this month at my sister’s home in Atlanta, Georgia, and here she is:

Below, is her identical twin sister who has resided in our home since nineteen-seventy-five. These two, the only ones in existence, were brought to life by my father in the nineteen-seventies. 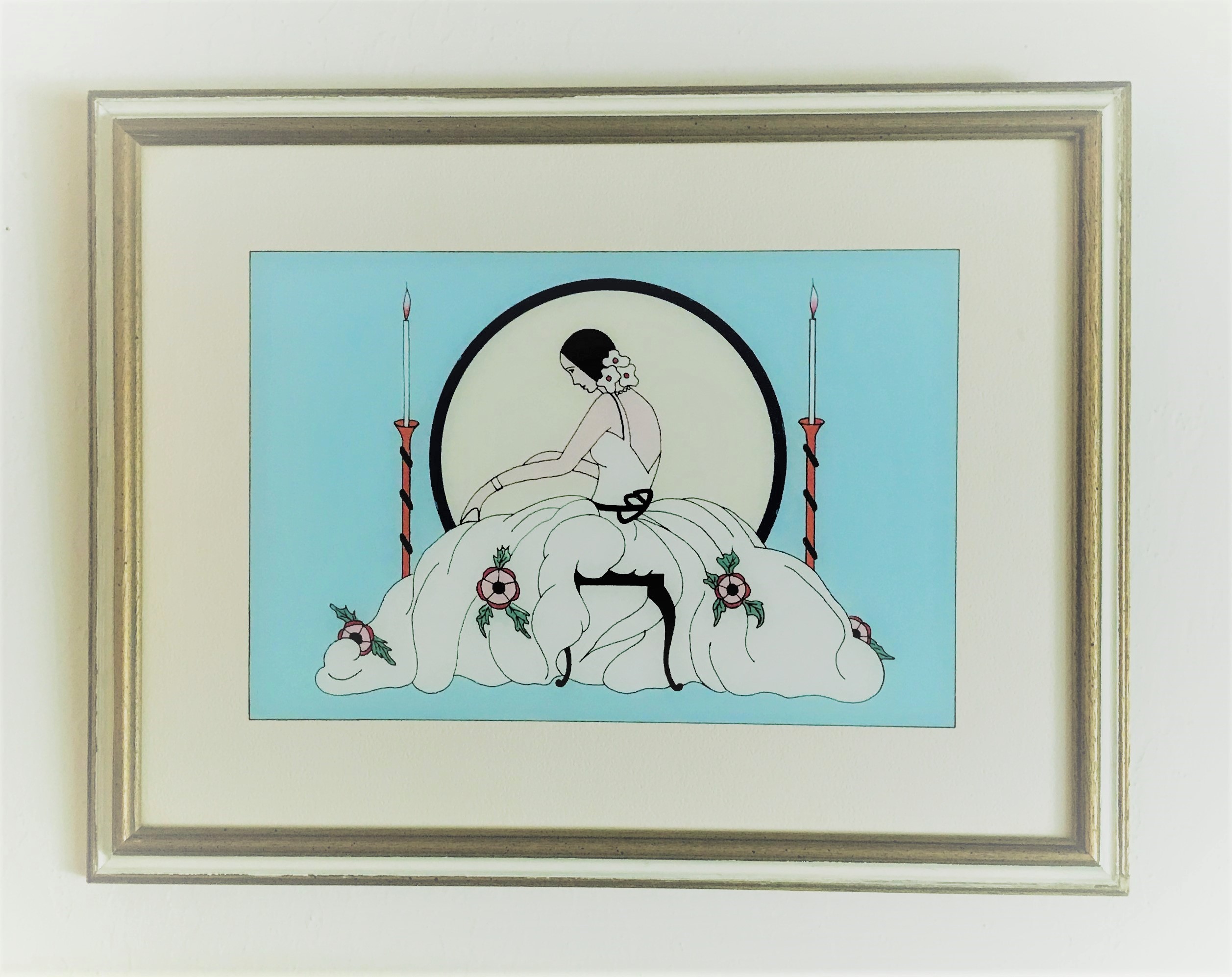 Mother nature never produced identical twins more alike than these two: all that differs are the background colors and picture frames.

I had long known of this other twin’s existence, but I do not recollect ever seeing her since the time my father gifted the twins to my wife, Linda, and my sister, Karen. During our visit with Karen in Georgia this month, I noticed “yellow-twin” hanging in her bedroom, just as “blue-twin” is prominently displayed in ours.

The original painting-on-glass, dating from the late thirties , was exactly like ours – with the same blue/turquoise background. After decades above my parents’ bed, it hung in my sister’s bedroom after Dad passed away in 1992. Before long, the painting literally dissolved as paint separated from the smooth glass back-side.

I will finish this post by attaching my earlier post explaining the heritage of these identical twin sisters and the family legacy left behind by my talented father.

The Painted Lady (on Glass)

Yesterday, I attended to something that long begged attention. I finally put on display a precious family heirloom, a unique work of art from the imagination and talented hands of my father, Alfred Kubitz. I call her “The Painted Lady.” It now hangs regally on the wall above my wife Linda’s large dresser mirror.

There is a story behind this image. To begin with, this art-deco rendering of “The Painted Lady” resides on the back of its protective glass, not on any traditional artist’s medium under glass. The composition, itself, was created in the nineteen-twenties or early thirties by an unknown (to me) artist. I vaguely recall conversations many years ago with my father that leave me with the impression that he first saw this image in one of the magazines popular during his teen-years – perhaps Cosmopolitan or Vogue? The art-deco flair of the rendering must have tweaked Dad’s significant artistic sensibilities, and this led him to produce his original painting-on-glass version which was the prototype for what is illustrated, here, in my post.

Going way back to my earliest recollections, I vividly recall the original painting hanging for many years in my parent’s bedroom. Likely, my father painted it in the mid-to-late nineteen-thirties and proceeded to gift it to my mother after their marriage on July 8, 1939.

Fast-forward to approximately nineteen seventy-four when signs were apparent of paint separating from the back of the glass on “The Painted Lady.” With retirement on the near horizon after thirty-two years at United Air Lines, my father recognized, in his deteriorating painting, an artistic/technical challenge as well as a small business opportunity for his retirement years. The challenge? To produce “replicas” of his artistic tour-de-force. Simply photographing the image and printing copies was not what he had in mind. The challenge of reproducing “The Painted Lady” on the back of glass and offering such unique works of art for sale to the public at a price only three or four times what the market might fetch for a fine photographic print – that was what he had in mind. In the spirit of “preserving” his original concept, these highly unique offerings were to be an affordable improvement on his original “Painted Lady” in two major ways.

First, the delicate black outlines of the original would be even finer and truer than Dad had been able to lay down on the glass by hand. Despite the difficulty, he did a fantastic job on the original, years ago! Second, the recreations would use art-quality, modern paints applied to the back of a glass surface ever-so-lightly etched for optimal adhesion of the paint, thus guaranteeing decades of life for the image.

Dad worked out a process that would meet all these objectives and result in a striking work of art. As I recall that process, the black outlines and the several colors would be silkscreened onto the glass in a series of layered steps. What you see pictured at the beginning of this post is one of the original prototypes (actually a finished/perfected product) of the process described, here. Dad designated this “Copy #1” on the back.

Dad presented this beautiful treasure to my wife, Linda. Here is his birthday gift inscription to her, penned in his own hand on the back:

My sister, Karen, also received one of these treasures from Dad. Hers is identical to Linda’s, except for a yellow background rather than the original blue as reproduced on our Copy #1. We called Karen and husband Jon cross-country the day before yesterday with congratulations on their fifty-fourth wedding anniversary. I asked Karen about Dad’s original “Painted Lady” which she had kept after choosing from the keepsakes he left behind when he passed away in nineteen ninety-two. Alas, Karen informed me that the original “Painted Lady on Glass,” like her creator, was no more. Much of the original paint had finally come loose from the glass after all those years, rendering her “lost.”

Although my father may have created one or two experimental prototypes before crafting the two copies I have described, here, I do not recall seeing any. I do recall finding in recent years some of his process documentation for the project: I hope I still have his papers somewhere in my files. Recalling my father so well, I am certain that meeting the technical challenge of creating these modern versions of his early work while preserving his artistic concept of “The Painted Lady” for others to see were more satisfying to him than the prospects of any potential commercial venture. He decided not to go forward with the latter.

It pleases me to know that at least two copies, offspring if you will, of the original “Painted Lady” live on to remind us and our descendants of my father, his craftsmanship, and his artistic legacy.