The sermon in church last Sunday was one that got my attention. Our parish priest, Father Noel, is unique in his personal enthusiasm, insight, and story-telling ability. He cited the story of two men sharing a train compartment while traveling between Dijon, France, and Paris. The gregarious, well-dressed young man of obvious means and accomplishment was eyeing his much older traveling companion who was dressed in neat, but dark and conservative clothing.

The old man had quietly kept to himself since leaving the station; now he passively gazed out the window at the passing countryside as the miles slipped by. The young man noticed the rosary beads fingered by his companion as they traveled and thought the practice quaint and definitely old-school religious. “Has this old fellow any concept of the new secular thinking rampant in today’s Europe?” he wondered.

The proud young man, seeing an excellent opportunity to demonstrate his knowledge while informing an old man in the process, inquired, “Have you, Sir, heard about the marvelous advances in science and technology which hold so much promise for the future?” The old man shifted his gaze to the young man, nodding almost imperceptibly. The young man proceeded to regale his companion with some of the newest and most exciting scientific developments from Paris, news which would surely astound the old man who politely listened all the while.

The young man then offered, “I would be happy to send you some very interesting articles on the new sciences which hold so much promise: You do read don’t you?” The man nodded yes. “Where, then, shall I send them?” the young man asked. The old man reached in his coat pocket and produced his card which read, “Louis Pasteur – The French Academy of Sciences  45, Rue d’ Ulm.” 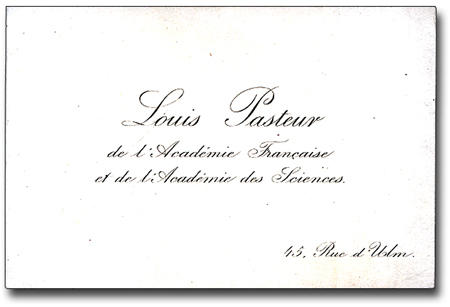 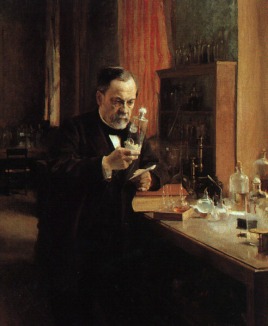 Louis Pasteur: In his laboratory and in real-life

With this introduction to his sermon on humility and its implied warning about pre-judging fellow humans, father Noel followed up with another story.

Then President George W. Bush was visiting a nursing home filled with aged, senior citizens. Upon encountering a very frail resident in a wheel chair, the president approached the old fellow and asked if he knew who he was. The resident replied, “No, I don’t know who you are, but if you ask the nurse over there, she can tell you.”

By the time the laughter subsided, Father Noel had solidly established his humility theme and proceeded to ask the congregation what it thought would be the reaction in heaven among the residents who were welcoming the latest refugee arrivals from our earthly situation. Would the new arrivals be greeted by applause and congratulatory welcomes from those already enjoying their heavenly reward? “No,” said father. “The typical reaction would likely be one of shock and surprise: He/she actually got in?”

As scripture informs us, even prostitutes and tax collectors gained entrance to the heavenly kingdom despite their earthly sins – because they recognized and repented their shortcomings; humility found its way into their lives at the end. Scripture does not cast those with superior earthly attitudes in a favorable light, father reminded us. The familiar biblical passage which tells us that “The last shall go first, and the first, last,” says it all.

What a wonderful reminder to all of us! Who among us does not need reminding? I have always sensed that the greatest test of human character would be that imposed by the sudden onset of great success, wealth, and public acclaim. Just how does one react in the face of such an adrenalin-shot to the ego? We see this very test occurring on a regular basis these days – your instant pro-football millionaires, for example! Recent news reports reveal just how poorly some of these have handled their new-found fame and fortune. Have you ever asked yourself how the sudden acquisition of great personal success and wealth might affect your character and change your attitudes toward the least fortunate among us?

As Father Noel pointed out, we each come into this world naked, and when we leave it, we can take nothing with us except the knowledge, that, hopefully, we have led our lives well – lives imbued with charity and humility.

I was deeply moved by Father Noel’s homily – its message and its elegance. On the way out of church, I grasped his hand and told him, “At the risk of jeopardizing your personal humility, I want to tell you that your homily was masterful. I am glad I am here this morning!” He seemed moved by my comment. There is nothing wrong with testing another’s humility with justified praise. I feel confident that my praise will have no deleterious effects on Father Noel.